At the center of Ring Ring Jingalong and Dark Heart Singalong, the new album by Crazy Eyes, is a 400-pound Yamaha CP-70 electric piano. Developed as a portable baby grand, the instrument has all the clang and sustain of a regular piano and its imperfect tone recalls analog years past without sounding anachronistic. G. Kellen Grace, leader of the Seattle quartet, got the thing in 2012 and its been his muse ever since. In Crazy Eyes, he plays it like a guitar, cranking out fast, heavy, chord runs for the band’s energizing, lo-fi rock.

The first half of the album’s title suggests the Prohibition Era jazz that inspires Grace’s melodies, while Dark Heart Singalong is a kind of spiritual purge Grace gets at in his lyrics. On album opener “Blood,” Grace chases melodies up and down the keyboard while Matt Leon’s guitar churns and squeals. Warren Pease’s drums walk off into a popping jazz solo, a shaker rattles and Adam Taylor’s bass nears sub-aural depth. It’s exciting as hell. On “Branch Rickey,” Grace opens with a piano melody only to destroy it, screaming so hard he nearly comes through the speakers.

The music recalls the glamorous charm of T.Rex and the terrifying grace of the Stooges curdling rock into punk. But for all its noisy punkishness, the album retains a certain psychedelic beauty. “Call Of The Weirdos” and “Venus” coo like glam rock at its best, while “WWiii Songs In Hiii-Fiii” and “Close To Death” play like Seattle grunge reimagined with an electric piano. “Go To Sleep” plays on syncopation between piano and guitar, bass and drums pumping out polyrhythms over a breezy pop-punk chorus: “Dream a little dream and go to sleep.” “Stormy Mourning” finds the entire quartet playing the same chords to build a wall of sound between verses.

Ring Ring Jingalong and Dark Heart Singalong never lets up. Its relentless, redemptive energy maybe stems from the madness it takes to haul a 400-pound instrument on stage every night.

Crazy Eyes kick off a monthlong national tour with their album release party tonight at Lo-Fi. 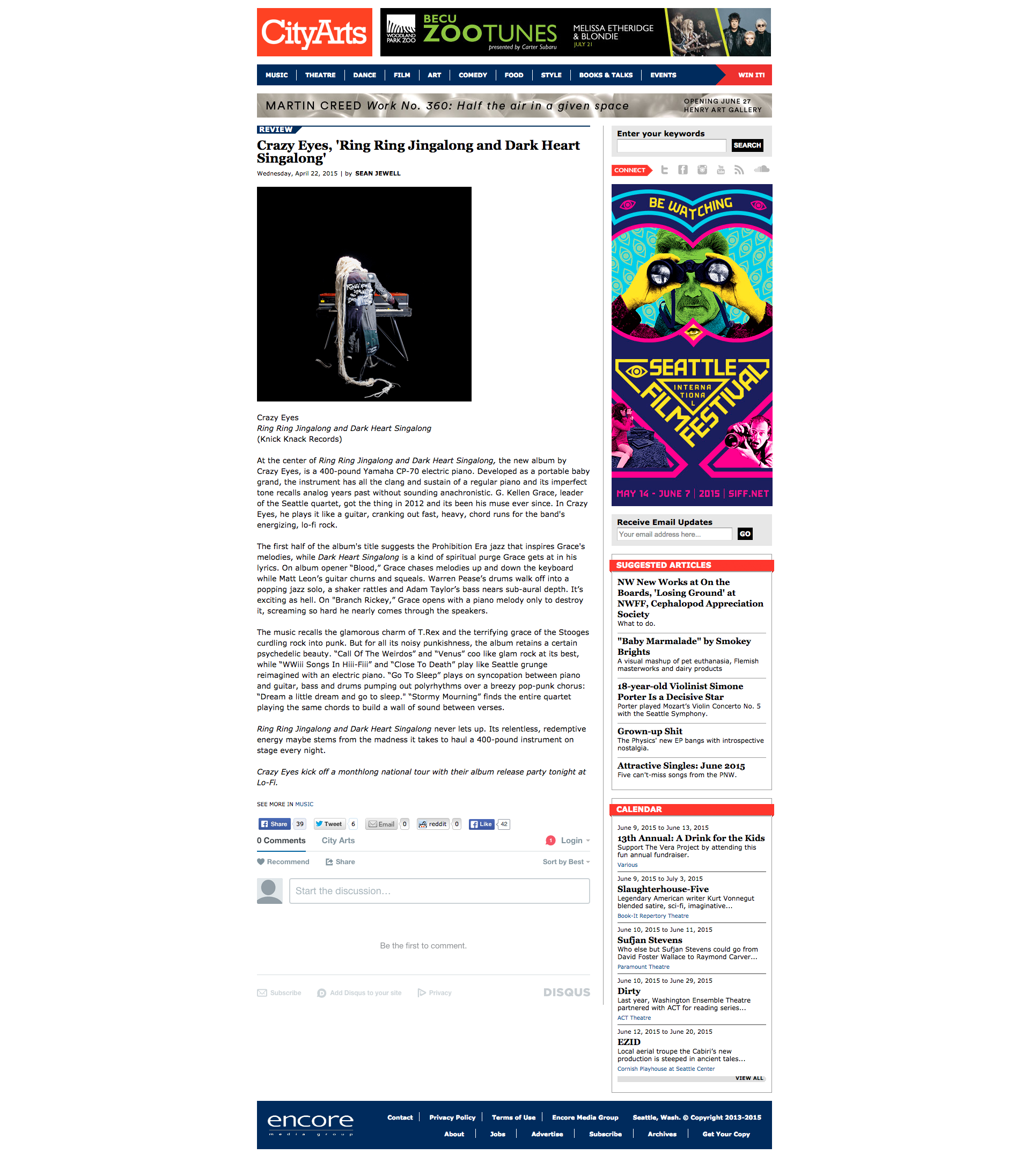